The holiday season is full of family traditions. Our family has done practically the exact same thing for Christmas, Thanksgiving, Easter and Birthdays for as long as we can remember. And we really wouldn’t have it any other way. But about 6 years ago T came up with a brilliant idea…..to host an Annual Family Games competition! What an excellent tradition this turned out to be.

Our family is naturally quite competitive, so she knew everyone would be on board. To be fair, this isn’t so much a Thanksgiving or holiday tradition as it is an annual event, but this years games fall on the Friday after Thanksgiving! (We try to alternate between summer & winter games) So, it’s the perfect time to share with y’all.

How did this all begin? Well, T was reading Martha Stewart Living and Martha suggested some fun family games to do over the Fourth of July. It was just a few games, but T thought this was something she could work with. It had been a hard year for our family, as we had recently lost T’s sister, so what better way to lift spirits and bring the family together than some friendly competition!

This quickly turned into more than just your average family get together. T researched minute to win it game rules and included games she remembered from her elementary school Field Day. We made posters with “sponsors”, we decorated, we bought all of the supplies….and then it came time to draw teams. M is one of 7 kids, among them are 20 grandkids ranging in ages from 3-30 and 1 great-grandkid. We divided the names of the adults among four teams and then the names of the grandkids among the four teams. The Teams have really gotten a life of their own. Originally, the teams were four colors. Now the four team names are themed (for example: Christmas themed, Disney themed, etc.) The teams have also gotten into the spirit as the team “captains” order or make “uniforms” to show their team spirit.

Of course with the announcement of the teams comes loads of complaints. Some even made trade offers. But once the teams are set it’s time for some friendly banter and preparation for the games.

The game day schedule is as follows:

9:00 a.m. – Opening Ceremonies and the Parade of Champions

Noon – Lunch and Crowning of the champions

Breakfast of Champions consists of super healthy foods like Lucky Charms, Wheaties, and cinnamon rolls. All that sugar will get your energy up so you are ready to go. Honestly, most of the families don’t make it for this part (it’s an early start so we are done before football games start). During this time, each team is provided materials to make a flag to carry during the opening ceremonies. 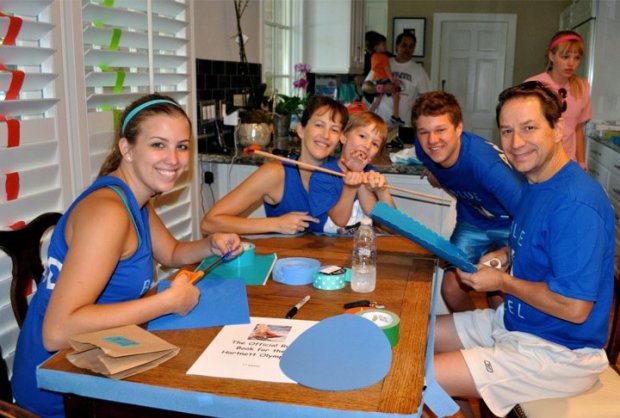 Moving on, what are Family Games without a torch run? Using a cutout of a torch, we take the younger kids down the block and spread them out along the way. When it’s time, the first kid takes off and hands off the torch as they reach the next kid. This continues until the last kid carries the torch into the house where our master of ceremonies is ready to turn on our gas fire place the moment the Flame is placed at its base. The flame lighter is typically, but not always, the youngest competitor. 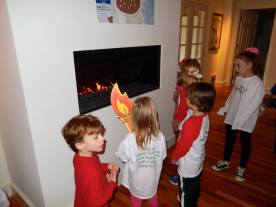 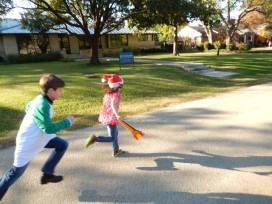 This signals the beginning of our games and the opening ceremonies begin. Music is played as the teams parade around the pool waving at each other and all of the “spectators”. This is perhaps the silliest, but also T’s favorite, part of the event. 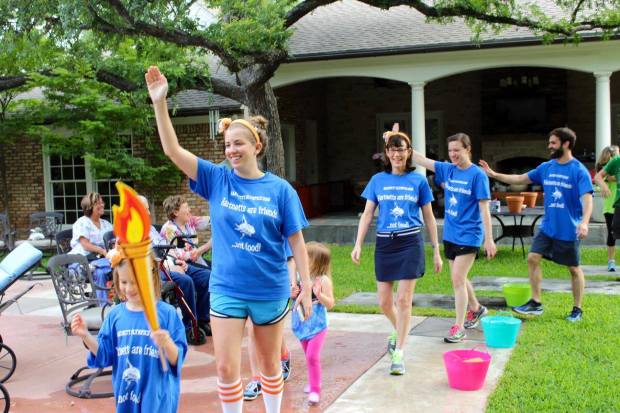 Now it’s time for the games. We have a master of ceremonies who directs everyone to each game station. (We will do a post about the specific games after this week’s 5th Annual Family Games.) But, they are typically minute to win it games or games you would find at a kid’s field day. We have games such as: watermelon seed spitting, pin the face on the potato head, leisure diving, relays, junk in the trunk, pyramid building, word games, etc. Really we could do several posts on the specific games. M’s parents (a.k.a. grandparents, and great-grandparents) serve as additional referees if needed. 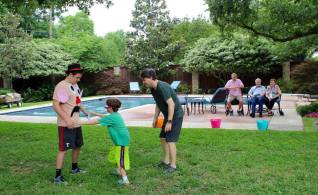 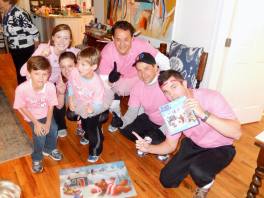 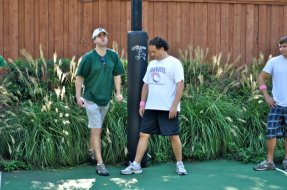 The games get very competitive and there is an endless onslaught of trash talking. But you can tell everyone is having a blast the entire time. There may even be some mild “cheating” going on. The point is for everyone to be together having fun, so who cares! The Master of Ceremonies keeps score and an alleged winner is announced. Nobody just “wins” Family Games because they will perpetually be accused of cheating, having a stacked team, or getting the rule book ahead of time.

The Annual Family GAmes has been such a great activity to bring family together, get kids and parents outside, and have old fashioned fun. It can be extra hard these days to pull them away from phones, TV, video games, etc. But if you can just get them out the door they will forget all about the shiny electronics (at least until the games end).

We will be sure to fill you in on how the 6th Annual Family Olympics turns out. What are some of your favorite family traditions?

We are just two moms balancing kids, work, and life. We hope you’ll find easy family friendly recipes, insight on how we make it work and what we have learned, and things to do to enjoy time with your kids.